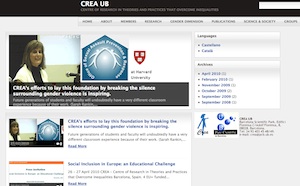 In 1991 we created a Research Centre for which there was no juridical norm in Spain nor in Catalonia, and which broke with all the feudal chains of our universities. The foundation of CREA followed the orientations of the international scientific community, advised by the best universities in the world as well as some of their main authors such as Robert Merton, creator of the Sociology of Science. This success enabled that a norm was developed to which CREA ascribed itself as well as a growing number of research centres. CREA was born in the University of Barcelona (Catalonia, Spain) with the aim of generating a scientific research that was able to identify theories and practices that overcome inequalities and to train professionals of the maximum excellence in teaching and research, stemming from different ethnic groups, genders, ages and social classes. Back then, CREA achieved its first challenge: to create a centre which was open, diverse, interdisciplinary and ethical.

In 2015, in an assembly, the members of CREA decided to be transformed from a research centre to a research community in the framework of the international scientific community. This community is composed by members of research groups and researchers from an increasingly diverse range of disciplines and countries. Some of them belong to the old CREA research centre and others to research groups which are not.  With this transformation, the intention is to take a position in a changing society such as the very CREA is, advancing more and more to the scientific and human excellence available and for everyone.

The assembly is a relevant space in the organization of CREA. Every month (each last Friday of the month) we organize an assembly to share the information and decisions regarding the functioning of the center and its working groups. All the persons who are members of CREA are invited to participate in the assembly regardless of their professional category. It offers the leading notion of your essay. A fantastic opening section captures the interest of your reader and conveys why your matter is significant.The dialogue is based on the validity of the arguments and not on the positions of power. Any person that wants to have Access to the minutes of the assembly can request it.