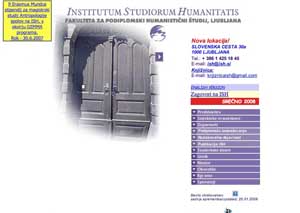 The Institutum Studiorum Humanitatis is the first and only autonomous higher education institution in the field of humanities and social sciences in Slovenia which attained state recognition for its academic value, and is authorised to confer MA and PhD degrees for accredited study programmes.

The ISH came into existence as a response to the need to establish an independent institution which would assist the development of missing and underdeveloped disciplines in various scientific fields in Slovenia. The idea was first broached by a group of university teachers and researchers at the University of Ljubljana. After several failed attempts to found an autonomous research and education institution in the fields of social anthropology, historical anthropology, discourse science, and epistemology, under the championship of the existing university organisation, the group themselves took the necessary steps towards establishment of an autonomous institution of higher learning.

The ISH has four main goals:

· to conduct graduate study of disciplines and fields not offered by other Slovenian institutions of higher education;

· to offer study programmes of interest to students from a region which expands beyond Slovenia’s border, especially those from Central and Eastern Europe; and to encourage and support the enrolment of foreign students;

· to create possibilities for Slovenian university teachers and researchers to work in fields that are poorly represented in the Slovenian scientific environment, but which are nevertheless considered interesting and necessary for their further development, as well as for their respective fields of work;

· to establish close co-operation and ties with higher education institutions engaged in the same or similar fields as those the ISH specialises in.

The main intention of the thus-created inter-institutional network is to convey knowledge which would otherwise not be accessible to students, and to enable the mobility of teachers and students. Another goal of the network is co-operation in research.